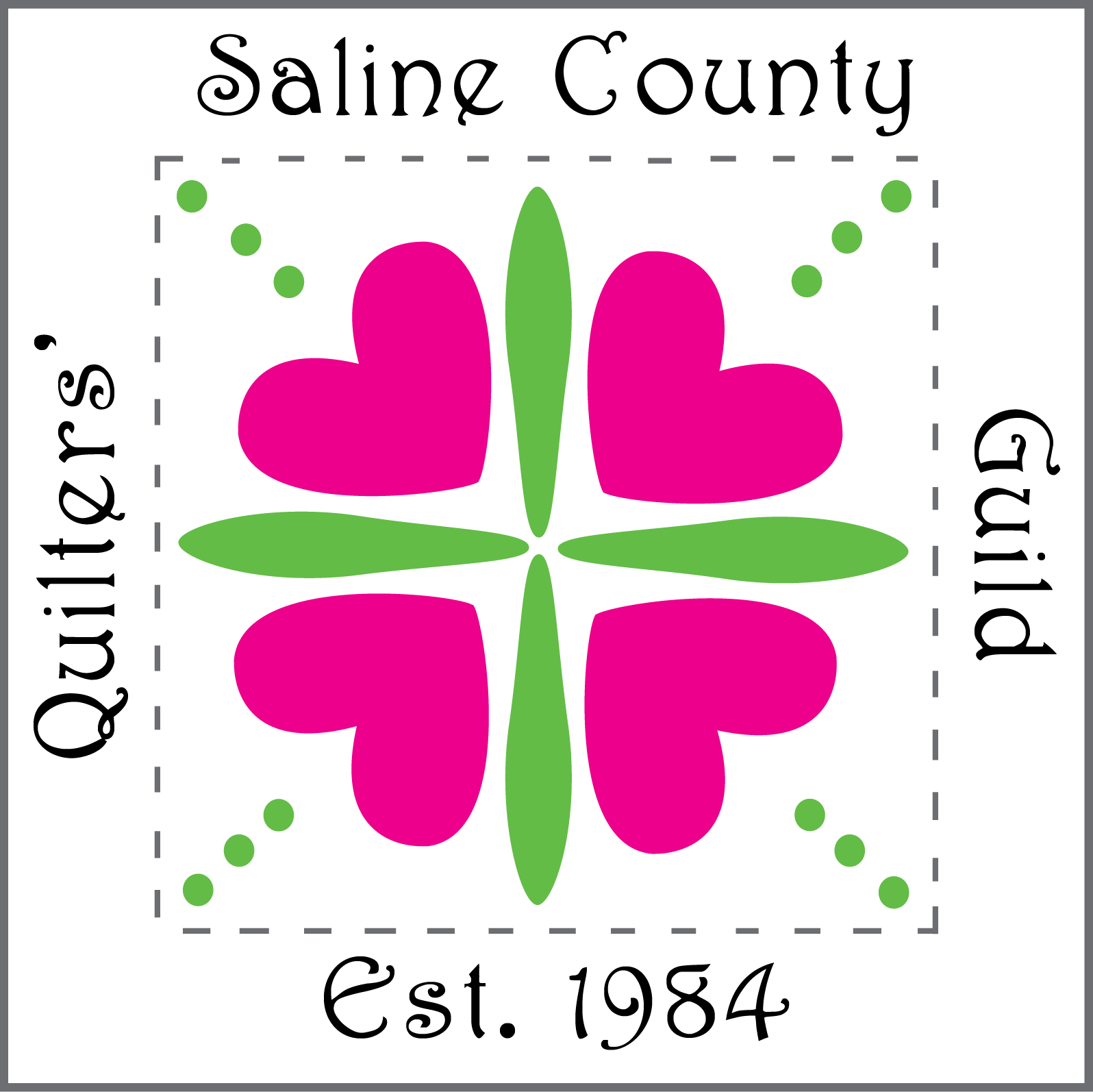 Saline County Quilt Guild was started in 1984.  You may have heard about the “Learn a Bunch at  Lunch” programs at the library several years ago.  Beulah Wright taught a  quilting class at one of their meetings.  Shortly afterward, with the full cooperation and urging of Betty White, the Librarian, there was a small meeting attended by Sue Richards, Betty White, Melba Riggan, Edith DuVall and Bobbie Frazier.  At the time, all of them except Betty were members of the young Arkansas Quilters Guild, and were driving to Little Rock on the second Monday of every month. We discussed whether we could have our own quilter’s guild right here in Saline County.

Membership has gone from 14 members in 1984 to over 120 at one point.  About half of the membership is from outside the county.

The guild had a donation quilt the first year of its existence and has had one ever since.  This is our main fund raiser.  The quilt is always given away in October at Benton’s Old Fashioned Day.

The first quilt show was held at Benton State Bank in the fall of 1985.  Marge Dixon’s quilt, “Annie Laurie Goes to School,” won viewer’s choice. Marge was rather proud—especially since she was a relatively new quilter.  The quilt was named after Marge’s granddaughter who was a newborn when she started it. Annie Laurie is now a mother herself. Needless to say, they have the quilt.  We might add that the pattern was a new version of Sun Bonnet Sue, which has become a classic in the guild.

It was not until after the 1991 show that the guild decided to have the shows every other year. That meant having a show on the odd numbered years.  However, there was not a quilt show in 2013, but there will be one in May, 2014.  They have been held at the Benton State Bank, the Saline County Library, the First Methodist Church, the First Presbyterian Church, City Hall, and even in the Gazebo on the court house lawn.  The quilt show to be held in 2014 will be at Midtowne Church on Boone Road.

Another thing that was started the first month the guild met that is still continuing is the monthly newsletter.  Mary Ann Stanley was in charge of it.

First Wednesday’s Quilters was started in July 20, 1988. Dorothy Shelnutt donated the use of her room to us every Thursday to work on guild projects.   Many of our donation quilts have been pieced and quilted there. These fun times led to our First Wednesday meetings.  Sue Richards always showed up with her lunch on Thursdays, but had to rush back to work. She declared she was missing all the fun, and invited members to come to her house on Wednesday, her day off.  The next month on the third Wednesday we went to Fay’s to quilt.  This began a great tradition.  Since then we have been meeting at someone’s house every First Wednesday.  We get a lot of work, eating and visiting done.  JoAnn Thompson, with her house decorated for Christmas, has us for December, and we’ve made it out to “The Cabin” in Lono with Royce as host several times.

QuiltMania, our yearly retreat, was started in 1994—a great way to celebrate the guild’s tenth anniversary.  Fay Poe and Bobbie Frazier were in charge of working out the details the first two years to make this possible. Fay continued in that position for eight more years. We have always met at the 4-H Center at Ferndale.  JoAnn Thompson was in charge of the 2005 retreat and will also oversee the one April 3-6, 2006.  Myrna Yandell has been in charge at times.  In 2014, both Myrna and Fay are in charge.

In 1995 former member of the guild, Debbie Chance, gave the retreat it’s name—QuiltMania.


The following people have served as president of the guild: